7 Reasons why you should #BeLikeRandy for Research & Development Tax Credits

7 Reasons why you should #BeLikeRandy for Research & Development Tax Credits

I don’t know about you but I have been quite enjoying #BeLikeBill currently sweeping Twitter and Facebook, I thought it might be a good idea to see if I could make use of the meme by creating a series of graphics on the theme of #BeLikeRandy.

Why Randy? Well firstly the name is unisex, secondly Randy (ran-dee) is a play on words for Research and Development or R&D (Ar-and-dee).

In this series of images our androgynous Randy is either an owner of, an employee of, or an advisor to a business that could benefit from the UK Government’s extremely lucrative but significantly under-claimed Research and Development Tax Credits. What I have tried to demonstrate is the extent to which successful claims can be made by highlighting significant areas where R&D Tax Relief is often overlooked, normally as a result of a lack of knowledge of its application. We also look at ways business advisors can add value to their client relationships by bringing in an expert advisor to help a company maximise its claim. 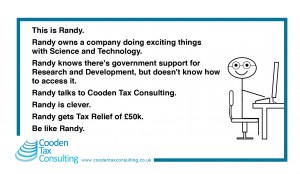 2 – Randy works for a business that builds things, this could be in Construction or Manufacturing industries, sometimes it is the Technical Director that is the driver to claim and Randy has a chat with the Business Owner telling him all about how the company could benefit from a claim for R&D Tax Relief. 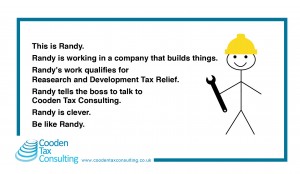 3 – Randy owns a business that develops software for a large international business, even though Randy’s company has been paid to perform the R&D, because the rules prevent both a large and an international business from claiming for subcontracted R&D, Randy’s company can claim the Tax Relief using the Research and Development Expenditure Credit (RDEC). There are also examples of where a company may be able to claim under the SME scheme, it all depends on what the contract says. 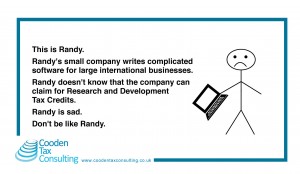 4- Randy’s company does “science stuff”, it is all they do, many companies involved in science related activity fall into the common trap of “it’s what we do for our day jobs, it’s not really Research and Development” this is probably one of the most common reasons given for not claiming, but it doesn’t prevent you from claiming indeed if it is what you do, your business could have been throwing away £000’s.It’s not the end of the world though, if you want to #BeLikeRandy you can still claim for your previous two financial years. 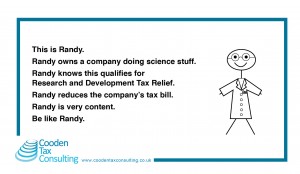 5 – Randy has quit a high-flying job as a techpreneur on the Silicon Roundabout and is now focusing on another passion, BEER. As a craft brewer Randy is always experimenting with new flavours and how they might work in a beer, Randy used to claim R&D Tax Relief for the Tech business but now wants to know if a brewing business can make a claim, so Randy talks to Cooden Tax Consulting to find out whether its possible, they provide some very insightful ideas and a few months later the new brew makes everyone happy, not least because it tastes great after all of the experimentation, but also because Randy claimed R&D Tax Relief and can reduce the price of the first barrel! 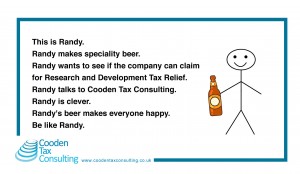 6 – Randy is an accountant, Randy has a varied client base including a number of limited companies, Randy knows that a limited company can claim for R&D Tax Relief when it is trying to make a global advance in Science or Technology through the resolution of scientific or technological uncertainty, what Randy doesn’t know in practical terms is how this manifests itself within a client’s business, Randy recognises that the core strengths of being an accountant lie in the day to day compliance services that Randy’s clients rely on but significant value can still be added by bringing in an external expert to help clients to maximise their claims. Both Randy and Randy’s clients are very happy with the outcome when they receive a referral fee and a tax refund respectively. 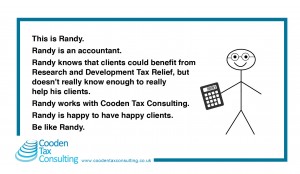 7 – Randy finishes the various incarnations as a Business Coach advising clients on such things as Sales and Marketing, Business Strategy, Leadership and Management, but as a great business coach Randy understands that no-one has the capacity to know everything, therefore, Randy has teamed up with Cooden Tax Consulting to offer clients access to advice about Research and Development Tax Relief, sometimes Randy asks Managing Director Simon Bulteel if he would come and spend 10 minutes at a group training meeting to talk about how R&D Tax Relief could benefit businesses. 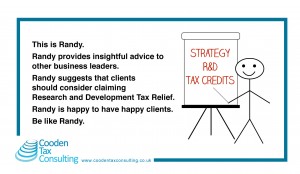